Selva di Cadore is a wonderful tourist destination in summer and winter in the heart of the Dolomites. Formed by small Ladin villages, it extends in the sunny valley Val Fiorentina and is an ideal destination for those who seek for peace and tranquility in contact with nature. This valley is nestled among some of the most beautiful peaks of the Dolomites, the majestic Mount Pelmo, Civetta and in the background the Marmolada, included in the UNESCO World Natural Heritage. >>><<<

Numerous attractions are available in this area:
In winter, Selva di Cadore is settled in middle of the Ski Civetta skiing area, which is the largest ski area in the Veneto region, with 80 km of slopes and only a few kilometers away from the ski slopes of Lagazuoi / 5 Torri Arabba / Marmolada.
Lovers of Nordic skiing can rely on a cross-country center with 4 tracks of varying difficulty. Who, however, prefers peace and nature, has the chance to try different paths with snowshoes and ski tours.

In summer there are numerous trails suitable for beginners and more experienced. You can also take many routes of historical and archaeological interest, such as the area of the discovery of the Man of Mondeval, the rock imprinted with dinosaur tracks and trails that trace the stalking of the First World War located in the area Lagazuoi and 5 Torri. For those who enjoy climbing routes in the area of the Val Fiorentina there are some of the most beautiful “vie ferrate” in the Dolomites, as Alleghesi and Tissi at the Civetta, or those sull'Averau and Nuvolao.
There are also many trails for lovers of mountain biking and cycling tours on the most beautiful mountain passes of the Dolomites.
Other sports can be practiced in the sports center of S. Fosca (soccer field, basketball, volleyball, tennis, fitness centre for sport climbing, large play area for children.)

Culture is an integral part of the place and the pride of the region is the Museum of the Fiorentina valley "V. Cazzetta" where the various archaeological documents are exhibited, among which the major international well-known burial of the "skeleton of the man of Mondeval ", which seems to be of great scientific importance. In the paleontological department is located a rich exhibition of fossils and the impression of the rock of Monte Pelmetto with traces of three dinosaur species. In the third section, which is devoted to the history of the valley, there are several references to the historical customs and traditions.
Even small Ladin style villages are of great historical and cultural significance. One of them is the residential area Andria where you will find numerous barns and other typical buildings of the Ladin tradition. <<< 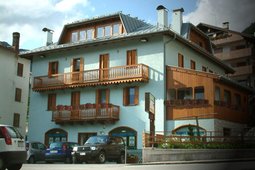 Residenza Domino offers lovely holiday apartments, each one bearing the name of a mountain flower, situated in a restored historical building with lift overlooking the central San Lorenzo square in Selva di Cadore. 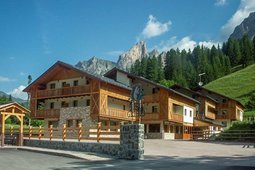 The Hotel Orso Grigio is situated 1419 m of altitude along Val fiorentina in the nice locality of Pescul, in the village of Selva di Cadore. The hotel is placed just in front of the ski-slopes of the wonderful ski area Civetta. A warm welcome to Garni Civetta. Located in the sunny alpine village at 1500 m above sea level in Santa Fosca, Selva di Cadore. Framed by the Dolomites, which have been a World Heritage Site since 2009.

from 37€
per person per night 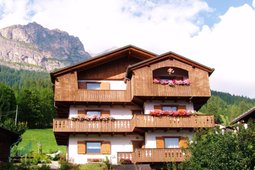 Villa apartment - 3 rooms - 4/5 guests. Description of the apartment: 70 m², 2 rooms (one with a double bed, one with two single beds that can be pushed together), big kitchen and living room with a sofa bed, centralized heating, shower. 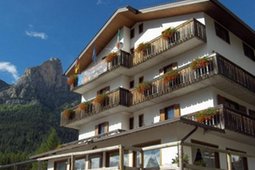 The Hotel Garni Ongaro is situated in the centre of a small mountain village at an altitude of 1420 meters. The whole year round it is exposed to the sun, surrounded by a large lawn and beautiful woodlands behind it, where one can go for long summer strolls. 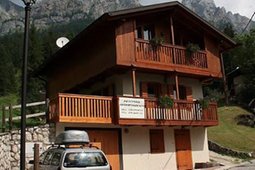 Situated in the wonderful area of the mount Civetta, the property is located in the locality Toffol, above the Santa Fosca town. The structure consists of 2 flats with 4 beds (2+2 - a double bedroom plus a sofa bed) and is equipped with Wi-Fi. 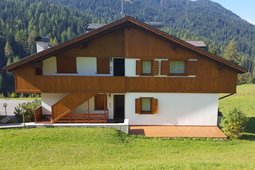 Comfortable Apartments, quiet and sunny, with a large terrace. The Apartments are located in a private street and surrounded by open meadows. Within 500 meters distance there are the main ski slopes of the Civetta ski area, easily reachable... 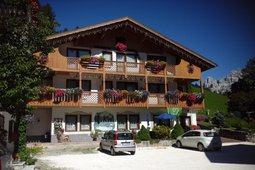 The Hotel Garni Ladinia offers a comfortable ambiance and a familiar atmosphere. In this warm family-run accommodation you will find yourself surrounded by the tranquility of this splendid valley. The house offers a rich breakfast buffet. 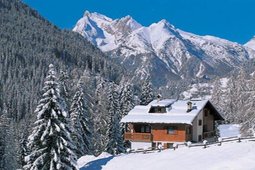 The family run Garni La Rondine is located in S.Fosca - Selva di Cadore, a small town in the heart of the Dolomites. The owners are pleased to welcome guests to spend quiet and relaxing holidays in a warm and comfortable place. 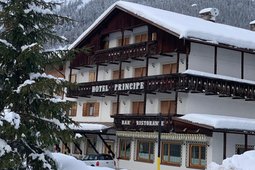 The Hotel Principe is located at the foot of the ski area Civetta in the midst of the Dolomites and offers wonderful landscapes with view of the mountain Pelmo, Marmolada, a splendid setting for walks, hikes and climbings in the summer and winter sport activities as well.